The Sacrament of Holy Orders

Two sacraments, Holy Orders and Matrimony, confer a special grace for a particular mission in the Church to serve and build up the People of God. These sacraments contribute in a special way to ecclesial communion and to the salvation of others. Holy Orders is the sacrament through which the mission entrusted by Christ to his apostles continues to be exercised in the Church until the end of time. This sacrament yields a special outpouring of the Holy Spirit which configures the recipient to Christ in his triple office as Priest, Prophet, and King, according to the respective degrees of the sacrament. Ordination confers an indelible spiritual character and therefore cannot be repeated or conferred for a limited time (Compendium, 321–322, 335). 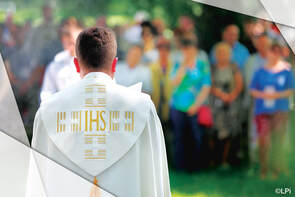 At the Last Supper Jesus said to his Apostles, "It was not you who chose me, it was I who chose you to go forth and bear fruit. Your fruit must endure, so that all you ask the Father in my name he will give you" (John 15:16) The saints were called to do God's works, but what about you? Why did God create you? What mission does He have for you such that He chose to create you? We spend so much time figuring out what we will do for college and career and yet how much time do we spend trying to figure out what Jesus meant by this passage and what His mission for us might be? How much time have you invested in discovering God’s plan for your life? Perhaps you are being called to be a priest?

Discerning one's vocation is the primary focus of the beginning years of seminary. Therefore, a seminary is an ideal place to learn about one's vocation, even if one is not sure they are called to the priesthood. If you feel that God may be calling you to the priesthood, the first thing you should do is talk to your pastor or another priest. These people can give you spiritual direction as you decide whether you should consider entering a seminary. Ask your pastor about attending one of the diocesan vocations retreats to help you discern.

If, after making a prayerful decision with the help of a spiritual director or the Vocation Director, that you would like to enter seminary to learn more about your vocation, there are several ways to enter the seminary. A high school graduate would normally enter a college seminary to study philosophy, graduating after four years.

Prospective seminarians who have already started studying at a two or four-year institution normally transfer to the college seminary as well. After these years of college, the seminarian who is approved then enters the theologate. Seminarians who have completed a college degree must study philosophy before becoming theologians. A pre-theology course normally takes two years. Older men who are entering the seminary program after a career and are between the ages of thirty and sixty, may attend a seminary with a special program designed for older men and so-called "second career" vocations. In this program, the pre-theology program and first-year theology program are blended together. After completion of pre-theology, and with approval of the diocese, the seminarian enters the theologate.

With the approval of the bishop and recommendation of the Vocation Director, theologians are normally ordained deacons in their third year of the theologate. A great amount of reflection and thought on both the part of the bishop, Vocation Director, and seminary faculty, as well as on the part of the seminarian, go into deciding who is ready to receive the Sacrament of Holy Orders. The culmination of study is the Ordination to the Holy Priesthood. The diocesan bishop normally ordains all the new priests for the year in one large ceremony at St. Joseph the Workman Cathedral in La Crosse during the month of June. Afterwards, the newly-ordained priests are given their assignments, normally for a high school chaplaincy, as a parochial vicar, or perhaps for higher studies.

Interested in learning more about a vocation to the priesthood? Contact the diocesan Office of Vocations or talk to your pastor.

The permanent deacons of the Diocese of La Crosse, like their brother deacons around the world, seek to live their vocation as humble images of Christ the Servant (the word deacon is derived from the Greek diakonia, which means service). They are men mostly with wives and families, though typically their children are older. They have had—and often continue to have—active careers, and before they began their formation toward the permanent diaconate they were already serving their parishes as dedicated members of the laity. But they felt a deeper call and followed it, and now serve the Church as ordained members of the clergy.

The permanent deacons of this diocese provide an invaluable service in visiting the sick and the homebound, preparing couples for marriage, teaching in parish religious education and faith formation programs, preaching the Gospel, administering baptism, officiating at weddings and wakes, assisting at the altar, carrying out administrative tasks, and more. But of all these forms of diaconal ministry, it is the service of charity—to the weakest, the most vulnerable, the suffering, those who hunger for heartfelt care, but also for the reassuring light of Christian faith and truth—that lies at the very heart of their vocation to the permanent diaconate.

A small but growing number of permanent deacons in this diocese are employed full time in parishes, while most offer their ministry on a part-time basis while continuing to hold jobs in the secular world. Indeed, the deacon is uniquely an inhabitant of two worlds, the clerical and the secular, thus forming a bridge between the two. He has a precious opportunity to infuse the world of secular work and society with the light of Christ and, conversely, to enrich his diaconal ministry in the Church with firsthand experience of marriage, family life, and the secular world.

The Diocese of La Crosse has benefited greatly from the humble and qualified service of these men who are ordained to image Christ the Servant, and there is a need for more of them. If you are a married or single man between the ages of 35–65 with sound moral character, mature faith, and possess a sense of vocation to service, perhaps you are being called to be a permanent deacon. You should be a man of prayer willing to make personal sacrifices to be a consecrated sign of God's love for others in your vocation to serve and someone who already lives the Christian life with active service, apostolic involvement, and leadership among the People of God.

Interested in learning more about a vocation to the diaconate? Contact the diocesan Office of the Diaconate or talk to your pastor or deacon.